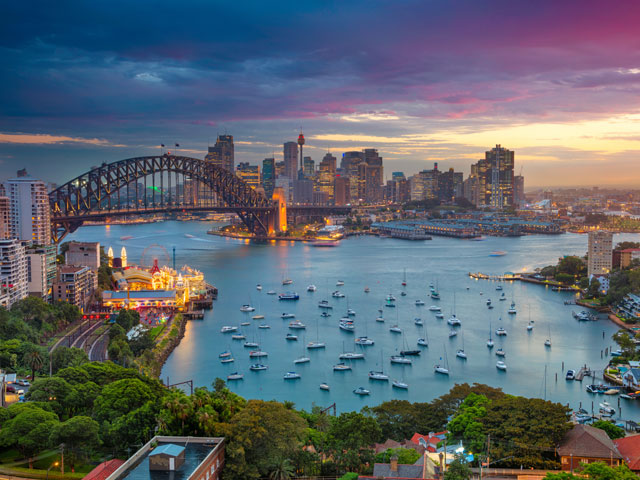 Sydney, Australia is one of the world's most exciting, must-see modern cities. Home to the famous Harbour Bridge and Opera House – two of the most iconic cityscapes on Earth – the capital of New South Wales has a visual wow factor that most other cities can only dream of.

Defined by the rugged Pacific coastline that surrounds it, Sydney is a timeless, cosmopolitan metropolis that is easy to fall in love with.[ReadMoreMob] The imposing Darling Harbour, plus the smaller Circular Quay Port are the hubs of waterside life, with the revered Royal Botanic Garden nearby. For the more adventurous, Sydney Tower’s outdoor platform, the Skywalk, offers 360-degree views of the city and suburbs.

Compared with its Australian counterparts, Sydney is loud and brash. It has glamour and casualness in equal measure: there is a balance between the beach culture found on Bondi Beach and the fine dining and vibrant nightlife found in Kings Cross and Oxford Street.[ReadMore]

Museums and memorials abound and include The Australian Museum, which opened in 1857 with the purpose of displaying the natural wealth of the colony, and the modern Museum of Sydney, which details the city's development. The Anzac War Memorial in Hyde Park is a public memorial dedicated to the achievement of Australia's armed forces in World War I.

The neoclassical Greek frontage of the NSW Art Gallery underlines the prominent and gregarious role art has in Sydney society. Major international exhibitions regularly arrive here and there's an outstanding permanent collection of indigenous art. And everything that’s best in contemporary Australian cuisine can be found at Circular Quay and The Rocks.

For those wanting to escape the city and go off the beaten path, the spectacular Blue Mountain or the Australian Bush offer spectacular sights and experiences. Sydney Harbour National Park protects large swathes of bushland, while Botany Bay’s history and connection to Britain is a big draw.

Whether you gaze from a distance or brave the climb, you’re sure to be overawed by the sheer majesty of Sydney Harbour Bridge. Affectionately known to locals as ‘The Coathanger’, it’s the world's largest steel arch bridge and an architectural icon.

The unmistakable exterior design of Sydney Opera House has inspired other buildings around the world ever since construction was completed in 1973. Guided tours of the building, one of the most iconic and distinctive in the world, are available.

The stunning Blue Mountains are so called due to the distinctive blue haze which hangs over them, a feature caused by eucalyptus oil carried on moisture in the air. The landscape of deep valleys and sandstone outcrops makes for a breathtaking photograph.

One of the world's most famous beaches, Bondi has been one of the main attractions of the Sydney area for years, beloved by swimmers, surfers and sunbathers alike. The streets around this kilometre-long stretch feature delightful cafés and restaurants, too.