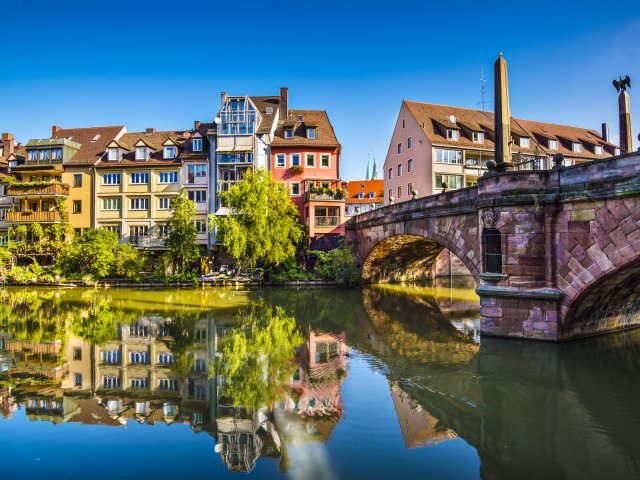 A major commercial city with a distinctly cosmopolitan feel, Nuremberg is today one of Germany’s most vibrant, energetic and endlessly stimulating destinations. Home to an abundance of cultural highlights and exciting attractions, from stylish galleries and museums to trendy bars, cafés and lively markets, as well as a few exciting annual events, Nuremberg offers a taste of modern German life.

There’s much more to Bavaria’s second largest city than contemporary delights though. While Nuremberg tries it’s best to shake off the shackles of its infamous past, there’s simply no ignoring the city’s diverse – and often damaging – history. With origins dating back to Roman times – the city was once the undeclared capital of the Holy Roman Empire – Nuremberg is a picture book of centuries-old structures, especially in the old town ‘Altstadt’ district. Historic highlights here include the collection of medieval half-timbered houses and gothic churches such as the mid-13th century St Lorenz Cathedral; the 13th century Nassauer Haus; and the city’s most impressive sight, the towering Kaiserberg Imperial Castle.

No time spent in Nuremberg is complete without examining the city’s importance in World War Two. An icon of the Nazi regime, Nuremberg hosted several of Adolf Hitler’s fanatical propaganda rallies throughout the war before being largely destroyed by Allied bombing raids in 1945; and after the war was chosen as the site of the war crimes tribunal, now known as the Nuremberg Trials. Reichsparteitagsgelände – where the famous black and white images of Nazi supporters hailing Hitler were taken – and the Nuremberg Trials Memorial are both must-visit sites, offering an emotive and unforgettable insight into this remarkable period of the city’s history.