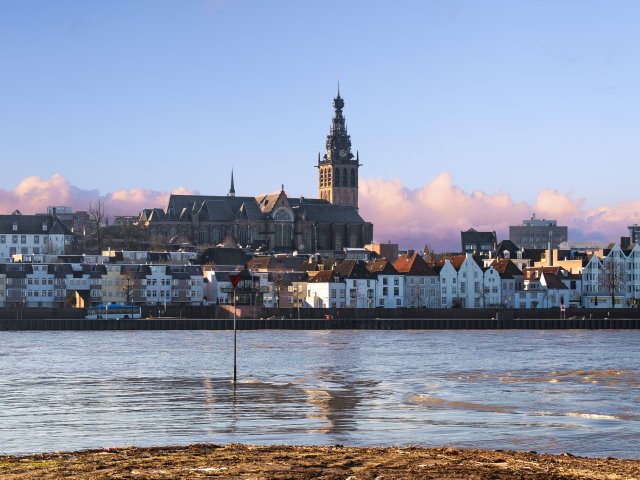 With origins dating back to Roman times, Nijmegen’s long and somewhat turbulent history spans well over 2000 years. For centuries, through the Roman, Hanseatic and Dutch Revolt eras, Nijmegen was heavily fortified and subjected to numerous attacks and sieges, which restricted the city’s growth. It wasn’t until the 19th century, when the largest fortifications were dismantled, that Nijmegen was able to expand and develop into the city you see today

Although Nijmegen is now the largest city in the Netherlands’ beautiful Gelderland province, it’s still relatively compact and easy to explore. The historic centre of the city – which was extensively damaged by German attacks and an accidental American bombing raid in World War Two – still offers a glimpse into the city’s fascinating past, with a few noteworthy structures and attractions to discover. The Carolingian chapel, believed to have built between 8th and 9th century AD; the remains of the Ottoman imperial castle; and the 15th century Town Hall are particular highlights.

There are an abundance of impressive sights to uncover elsewhere in the city, including the 16th century weighing hall at Grote Markt; the 13th century St Stevenskerk church; and Lange Hezelstraat, the oldest shopping street in the Netherlands. Nijmegen is also home to a number of interesting museums, including the Het Valkhof Museum of art and archaeology, situated on a former Roman fortress site; the unique Afrika Museum; and the National Liberation Museum. During your relaxing time here you can take your pick from a collection of vibrant restaurants, busy bars – there are more bars here per square feet than anywhere else in the country – and excellent shops and boutiques too.