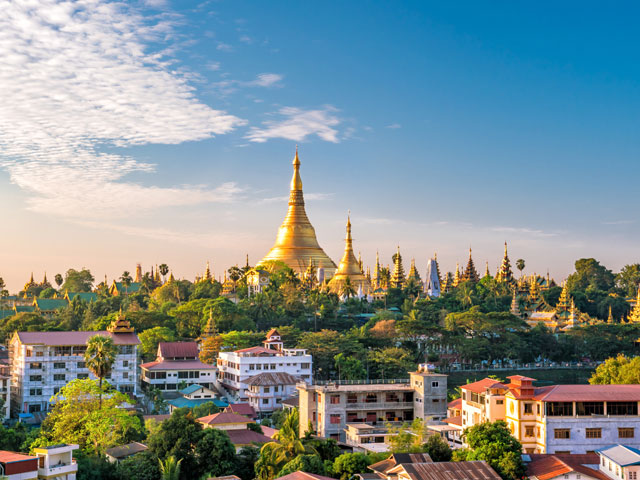 Yangon has earned the nickname ‘The Garden City of the East’ due its lush green trees, shaded parkland and beautiful lakes. But Yangon (formerly Rangoon) is also the commercial and increasingly cosmopolitan capital of Myanmar.

From the port Thilawa, a visit to Yangon reveals a mix of British colonial architecture, modern high-rises and gilded Buddhist pagodas that define its eclectic skyline.[ReadMoreMob] The downtown pavements are one huge open-air market, and feature some of the most impressive colonial architecture in Southeast Asia, alongside a swathe of new shops, restaurants and bars.

The city has barely changed at all, and the Shwedagon Paya, a glistening, awe-inspiring golden Buddhist monument is seemingly the centre of everything. An eye-catching wealth of colour and pigments on its 326ft-high curved exterior gives way to the top of the Pagoda’s crown which is encrusted with diamonds, rubies and other gemstones. Locals and monarchs often donate gold to ensure this incredible structure maintains its beauty.

The city's other notable religious sites include the Botataung and Sule Pagodas, both containing Buddhist relics.

This magnificent 2,500-year-old, 326ft-tall gilded stupa dominates Yangon's skyline. It’s Myanmar’s most sacred site, a stunning complex of pavilions and shrines with a dome that features in excess of 6,500 diamonds and other precious stones.

No fewer than 10,000 Buddhist temples were constructed in Bagan – once capital of the Pagan Kingdom – when the city was at its height between the 11th and 13th centuries. Over 2,000 have survived to the present day, creating a truly inspirational panorama.

This sacred tradition is an important milestone in the journey to monkhood. The young boys (novices), dressed in glittering robes to imitate princes, are led in a celebratory coming-of-age procession, accompanied by an orchestra and dancers.