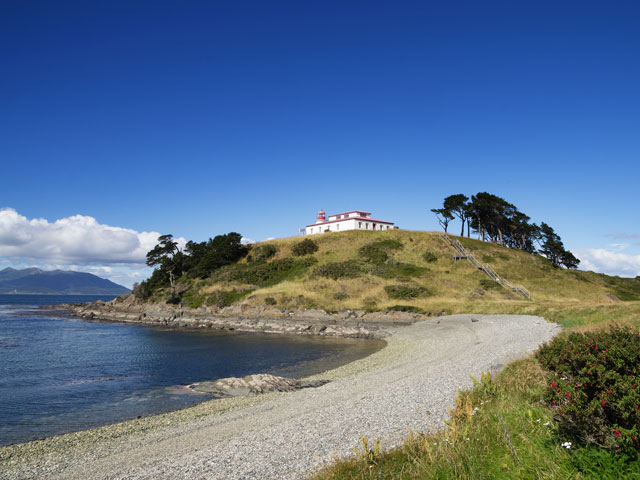 Just below Punta Arenas is a small monument that marks the "end of the Americas" although Chile lays claim to a small part of Antarctica as well.

However, for all its claim to be a frontier outpost, the town is remarkably cosmopolitan. There are fishermen mixing with pilots from the Chilean air force base, sharp-suited businessmen sipping wine in hotels and travellers hitching a ride out to Tierra del Fuego. The nearby penguin colonies are fascinating, while in the town itself there are several interesting museums.

The Museo del Recuerdo has collections of antique agricultural and industrial machinery, including a reconstructed sheep-shearing hut. In the library is a display of historic maps. The Naval and Maritime Museum has exhibits on naval history, as well as a replica ship, complete with bridge, maps, charts and radio room.

Palacio Mauricio Braun is a fabulous mansion built by a wealthy pioneer sheep farmer at the end of the 19th century. It was given to the Chilean state by one of Mauricio Braun's sons. It displays Braun's original furnishings, including French chairs and tables, inlayed wooden floors and Chinese vases.

Explorer Ferdinand Magellan was the first European to cross the Pacific Ocean and is credited for discovering the eponymous Strait of Magellan. His legacy is honoured in many ways including an impressive statue in Plaza de Armas, central Punta Arenas.

Linking the Atlantic and Pacific oceans, the Strait of Magellan separates mainland South America with Tierra del Fuego. Along its 350 mile stretch, there are various points of interest, including Los Pingüinos Natural Monument and several national parks.

This tiny island in the Strait of Magellan is home to thousands of Magellanic penguins, characterised by the horseshoe of black feathers on their chests. These sociable creatures live in a colony and are can often be seen playing or building nests.

There may be few Kawésqar and Selk'nam people left in Patagonia, but their rich cultures can still be experienced in the region. Despite the harsh weather conditions, both peoples have survived for hundreds of years, primarily through hunting and fishing.