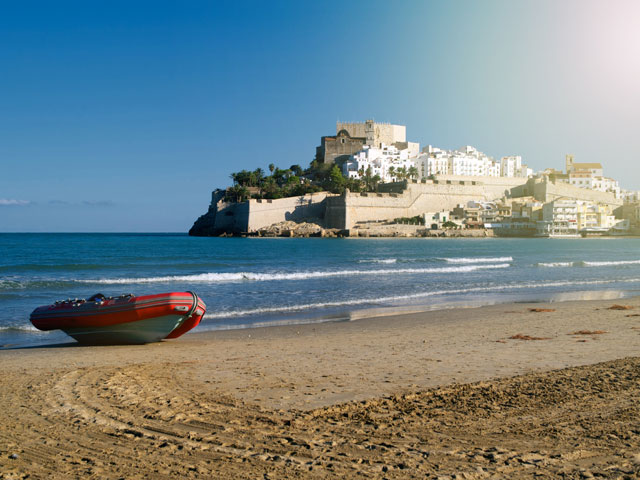 Known locally as the ‘City in the Sea’, the old town of Peniscola in the eastern Spanish province of Castellón, is a fortified seaport built on a spectacular rocky promontory, joined to the mainland by a narrow strip of land.

Also known as the ‘Gibraltar of Valencia’, Peniscola is a town with a strong fishing tradition; its seafood – and the classic paella in particular – is strongly recommended. The coastal town is known for beaches like Pebret and Norte. Norte is a calm, wheelchair-friendly beach that goes on forever and is perfect for swimming and sunbathing. It is backed by the pleasant palm-tree-lined Paseo Marítimo promenade. The southern coastline is steep and rocky, dotted with tiny beaches and isolated coves.

The historic old town of cobbled streets and whitewashed houses is very picturesque. The dominating 13th century Peniscola Castle has panoramic views of the coast and Artillery Park, which is full of lavender and olive trees. It was once the residence of Pope Benedict XIII, and used to represent Valencia in Anthony Mann’s film, El Cid.