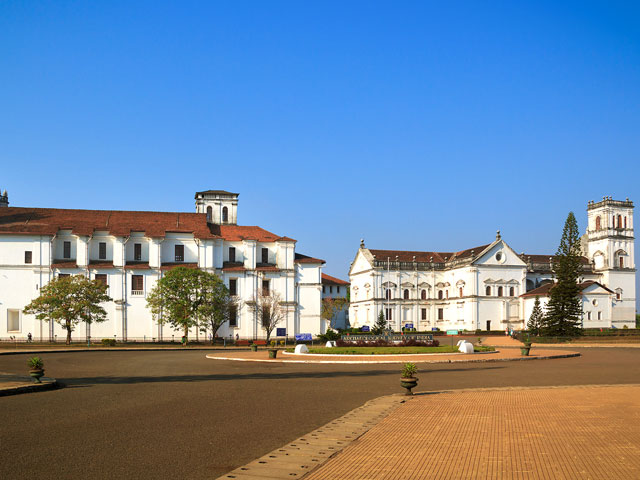 Mormugão is the main port of the tiny State of Goa, renowned for superb beaches and a colonial history that combines the best of Indian and Portuguese culture.

Known as the ‘Pearl of the Orient’, Goa showcases a mix of scenic beauty and architectural delights, from golden beaches and spice plantations to striking temples and bustling markets.[ReadMoreMob]

The Arch of the Viceroys was built in 1597 to commemorate Vasco da Gama’s arrival in India, while the nearby Church of St. Cajetan is modelled on St. Peter’s in Rome. Opposite the magnificent Se Cathedral at Old Goa – one of the largest churches in Asia, is the Basilica of Bom. Here the remains of Francis Xavier, a founder of the Jesuit order and patron saint of Goa, lie in a silver casket next to the altar.

Yoga is king in Goa, and the crop of spiritual activities available to visitors grows each year. T’ai chi sessions, Reiki healing courses, meditation, and most forms of spiritual exploration are all practised freely. The scents, spices and flavours of Goa’s cuisine is the area’s other main attraction, and the Indo-Portuguese influence will surprise and tantalise even seasoned travellers.

Legacy of the Portuguese

The Portuguese history of Goa began in the 15th century, when Portugal began to set its sights on Goa as a destination in which to expand her empire abroad. For nearly 500 years, this small area on India’s west coast was ruled by the Portuguese. Their influence is still visible today in the architecture, food, art and ideology that make Goa unique.

Since ancient times, India has been known as the country of fabulous aromas and flavours. Spices are actually the cause and the stimulus of the historical development of mankind, colonial conquest and geographical discoveries. Today, India is the world leader in the production and export of spices. India is growing more than 50 different kinds of spices, and supplies more than 150 countries.

Although it is one of the smallest states in India, Goa boasts some incredible picturesque beaches. From the small Bogmalo Beach to the larger Mandrem and Agonda Beaches, they all offer clear white sand, beautiful walks and stunning views.