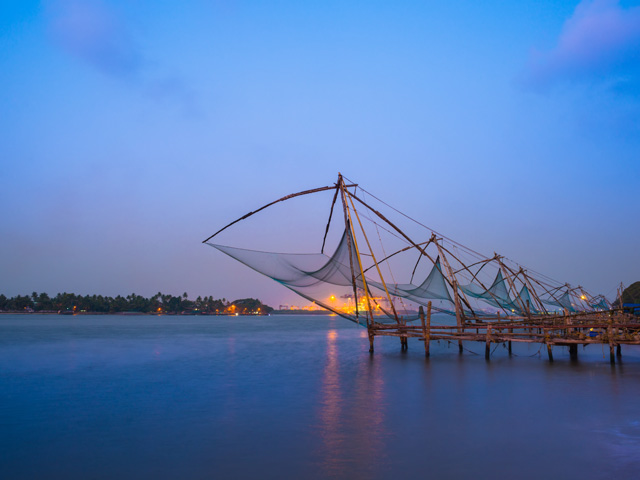 Known as the Queen of the Arabian Sea, serene Kochi on India’s south-western coast has been drawing traders, explorers and travellers to its shores for over 600 years.

Formerly the port of Cochin, Kochi grew to prominence as an outlet for the spice trade in the 14th century, and is most famous for the iconic-cantilevered Chinese fishing nets that billow out across its harbour.[ReadMoreMob] This ancient trading centre is a melting pot of cultures and religions, evident in the town’s buildings, which range from the oldest synagogue in the British Commonwealth to the austere Mattancherry Palace, built by the Dutch but influenced by the Portuguese.

Chinese fishing nets are fishing nets that are fixed land installations for fishing. These nets, known locally as ‘cheena vala’, are fixed to mounted, cantilevered frames, allowing them to be lowered into and hoisted from the water. Five or six fishermen operate each net at high tide. The typically modest catch is usually sold immediately.

The cuisine of Kerala is inspired by a fusion of Malabari, French and Arabian influences. It’s a blend of both vegetarian and non-vegetarian options. Rice, fish and coconut are the most common ingredients of almost all Kerala famous food. The flavours are enhanced with chillies, curry leaves, mustard seeds, turmeric tamarind, black pepper, cardamom, ginger, and cinnamon.