A taste of Suffolk on the high seas...

As much as our inspirational itineraries and destinations, fantastic entertainment and superb service, one of the undoubted highlights of cruising with Fred. Olsen for our guests is the food enjoyed on board our smaller ships. Each and every dish served is one to remember, whether it's a freshly-prepared breakfast cooked just the way you like it or a sumptuous five-course á la carte dinner. To provide these memorable culinary moments, our Chefs dedicate themselves to their craft and we as a business dedicate ourselves to finding and using the best produce we can, including some that's sourced from places that are closest to our hearts.

With this in mind, we are proud and honoured to work with, support and promote a number of local, independent companies based close to Fred. Olsen Cruise Lines’ Head Office here in Ipswich, Suffolk. Working with popular, homegrown companies such as Adnams, Aspall, St. Peter’s Brewery and Stokes Sauces, we provide our guests with an authentic ‘taste of Suffolk’ on board our ships, to enjoy wherever they are in the world.

Here is how Fred. Olsen’s food and beverage experts, and teams of dedicated chefs, have been incorporating some of Suffolk’s finest, best-loved brands, products and flavours into ours… 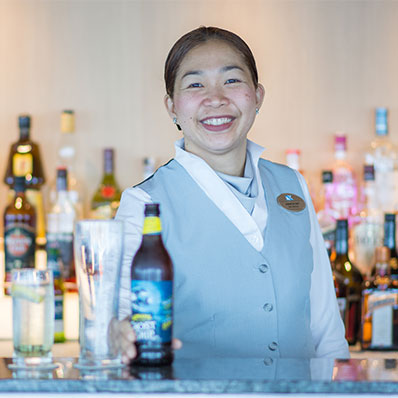 Founded in 2004 and based near Woodbridge, less than 20 miles from Fred. Olsen’s Head Office, Stokes Sauces emerged from the beliefs of company founder Rick Sheepshanks, that all food should be ‘honest, clean and taste delicious’. Today the company employs over 60 people and produces over 50 different lines, including sauces, dressings, condiments and jams, all to carefully created, closely guarded recipes using traditional cooking techniques.

Served in restaurants around the UK, and having won many awards over the years, Stokes Sauces are now enjoyed on board Fred. Olsen’s ocean-going ships as the perfect accompaniment for many of our expertly prepared dishes.

Guests can add an extra layer of flavour to their steak or roast beef, with a Cider & Horseradish Mustard or Creamed Horseradish Sauce; enjoy Fig Relish with their cheese; or try a sweet and sticky Red Onion Marmalade with cold meats, pies and ploughman’s. There are classic Stokes Sauces available too, including a Real Tomato Ketchup perfect with fish & chips, bangers and mash and a full English; Real Brown Sauce for bacon and sausages; and Real Mayonnaise. 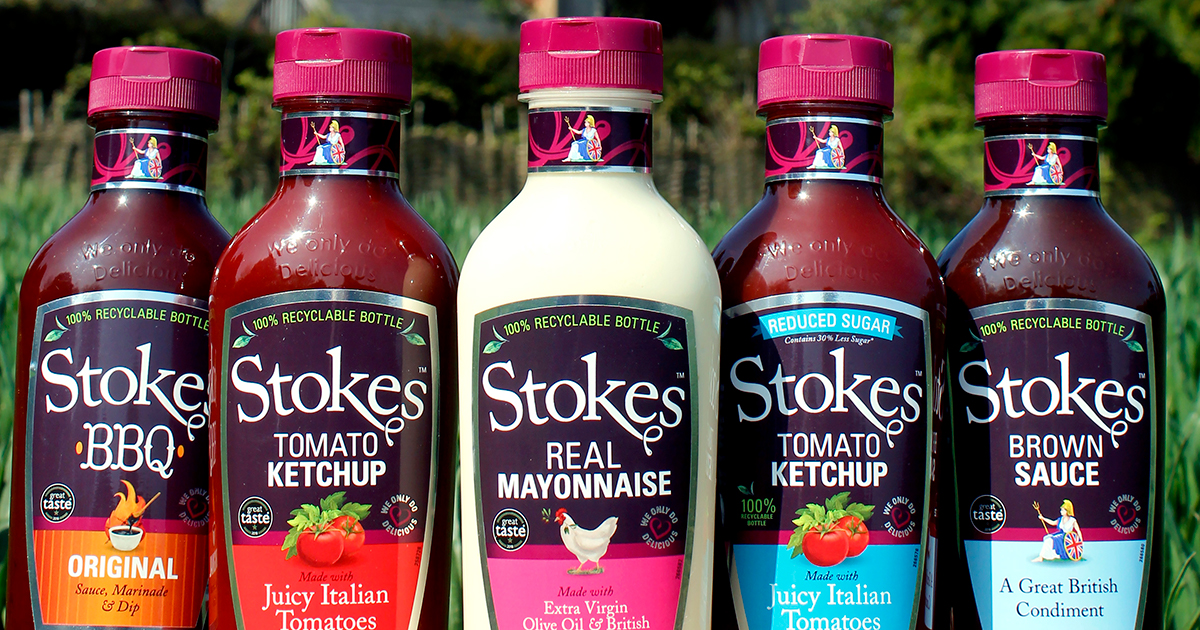 Amongst the most historic and best-known companies in Suffolk, Aspall has been crafting its iconic ciders since the 18th century, when Clement Chevallier planted the county’s first large-scale cider orchards. Almost 300 years on, Aspall are still pressing and blending their apples into a range of delicious fine ciders and vinegars at the original Aspall Cyder House, located in a tiny, picturesque hamlet north of Debenham.

Aspall have been sharing Suffolk’s sweet flavours with the world for centuries, so it is our pleasure to offer guests on board our ships the chance to enjoy one of the company’s finest ciders as they explore the world’s oceans and waterways.

The Premier Cru Cyder was the first cyder produced by Barry and Henry Chevallier Guild when they joined Aspall, and is still their favourite drink. Made with bittersweet apples, this vegan-friendly full-dry cyder boasts sophisticated floral aromas and a flavour that works perfectly with roast pork, chilli and curry dishes and cheese.

While beer has been brewed on the company’s historic site in Southwold – a beautiful, quintessentially British seaside town – since 1345, Adnams and Co. was established in 1890 and has been crafting some of Suffolk’s greatest exports ever since. Today, Adnams proudly operates one of the most modern breweries and distilleries in the UK, producing a wide range of award-winning beers, ciders, wines and spirits, as well as kitchenware and food.

A trio of Adnams’ most popular brews, which have been enjoyed in pubs up and down the UK for many years, are served in the traditional-style bars and lounges on board our ships, and have proved very popular with our discerning, beer-loving guests!

The ‘hauntingly good’ Ghost Ship pale ale, served in both alcoholic and vegan-friendly, non-alcoholic varieties on board, is renowned for its light colour and refreshing citrus notes that combine perfectly with spicy foods, pizzas, salads and BBQ food. Ideal for roasts and fish & chips, Southwold Bitter – a copper-coloured classic bitter, first brewed in 1967 – is also available. 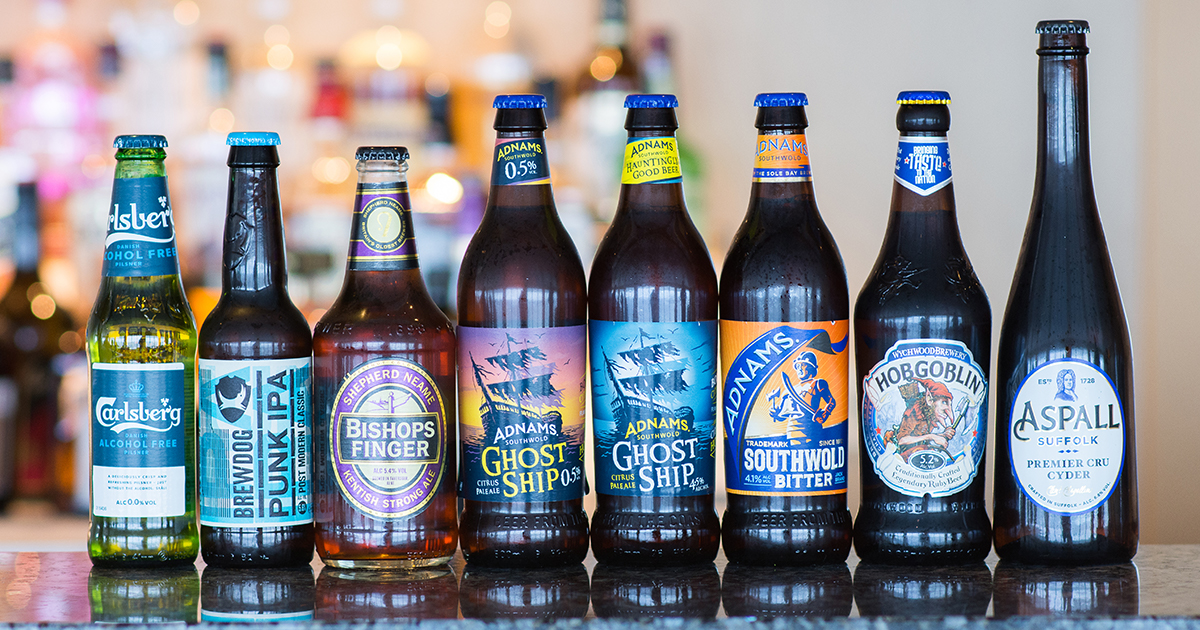 Based in St Peter, South Elmham, a small village near Bungay, St. Peter’s Brewery was founded in 1996 and operates out of a number of former agricultural buildings adjacent to St. Peter’s Hall. While the brewery is relatively young, especially compared to some of Suffolk’s other breweries, St. Peter’s relies on historical, tried-and-tested Roman-era brewing methods and equipment to create its classic cask-conditioned ales.

Well known for its traditional beers, including a range of bitters and mild brews, St. Peter’s also produces a selection of speciality beers such as honey porter and fruit beer, as well as a delicious gluten-free beer that is served on Fred. Olsen ships.

St. Peter’s G-Free Beer, which is made with no malted barley and is certified by Coeliac UK, is a clean, crisp ale with a pilsner lager-style finish, offering our guests a zesty, tropical-flavoured alternative brew to enjoy in the comfort of our bars, lounges or out on deck.

A highlight of every cruise...

Indulging with sumptuous food in our elegant restaurants and dining venues, and relaxing with a drink and great company in our comfortable, homely bars and lounges, are high points of every Fred. Olsen cruise. Now, these experiences can be made even more enjoyable, with an authentic taste of Suffolk.